On our first full day in Egypt, we did what almost any tourist would do- we went to see the pyramids.Our hotel paired us up with the best taxi driver I’ve ever had in my life, and we set off. He was very friendly and knowledgeable of all the sites in Cairo as well as the history, and he was happy to impart his knowledge on us.

Our taxi driver took us straight to a company that offered pyramid tours, and we got started. The prices of things are negotiable, so my husband got us the best price. The exchange rate is very different, with one USD equaling almost 8 Egyptian pounds, so while it felt like we were spending a lot, we probably only spend around $200 or less on the pyramid tour. This tour really was worth every penny, though.

When we were assigned our tour guide, he gave us the option of riding a camel or a horse to the pyramids. The pyramids are a few miles away from where we were, and you cannot drive a car to the location. While I really love camels, I opted for the safer option and rode a horse. It was my first time riding a horse in years, so I was obviously frightened. It was M’s first time ever riding a horse, but he handled it like a pro. 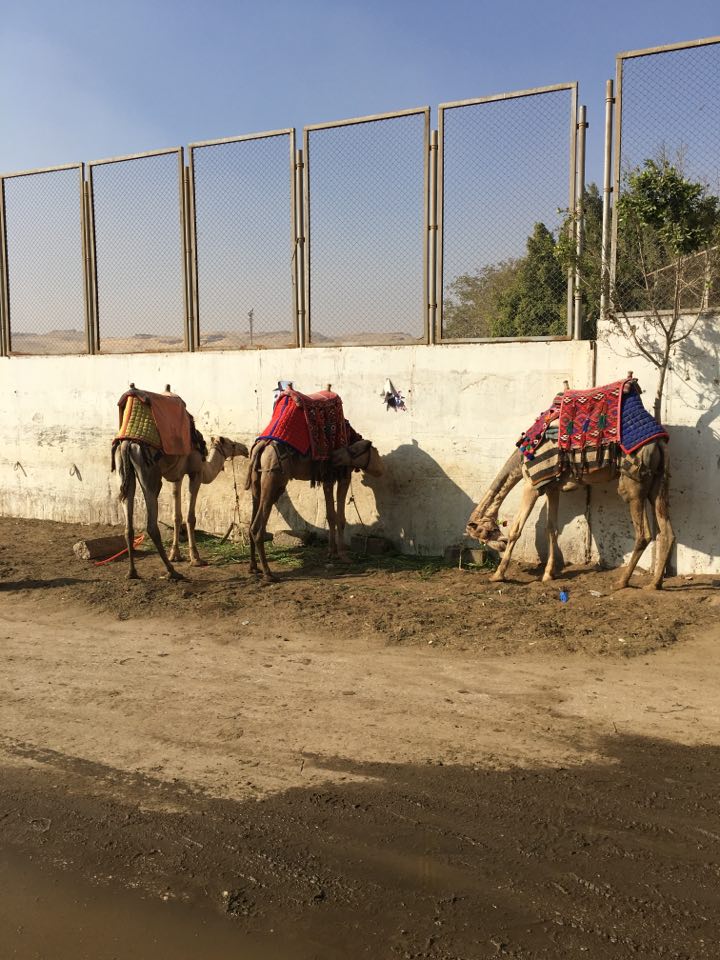 After we finally got situated on the horses, a small child came and guided our horses into a gated area surrounded by desert. This child couldn’t have been more than 8 or 9 years old, but seemed so eager to work. He was so excited when we tipped him in Saudi currency, too, as it is more valuable than Egyptian currency. Our tour guide lead us through the desert, and before I knew it, a pyramid started to surface in the distance. 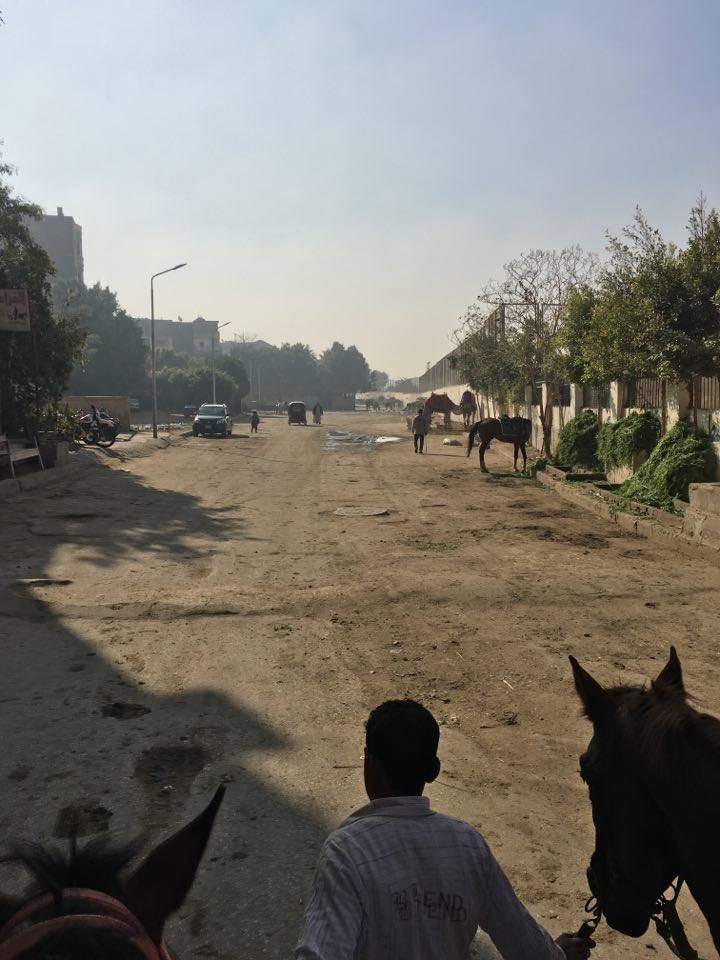 Seeing the pyramids in real life for the first time was one of the most amazing things I have ever experienced. I mean I have seen pictures of them before in textbooks and online, but seeing them in real life was surreal. There is this fascinating energy that surrounds the area, an energy of power and magnificence that can’t even really be put into words. I couldn’t stop staring, because I knew I wanted to take in every second of this experience. 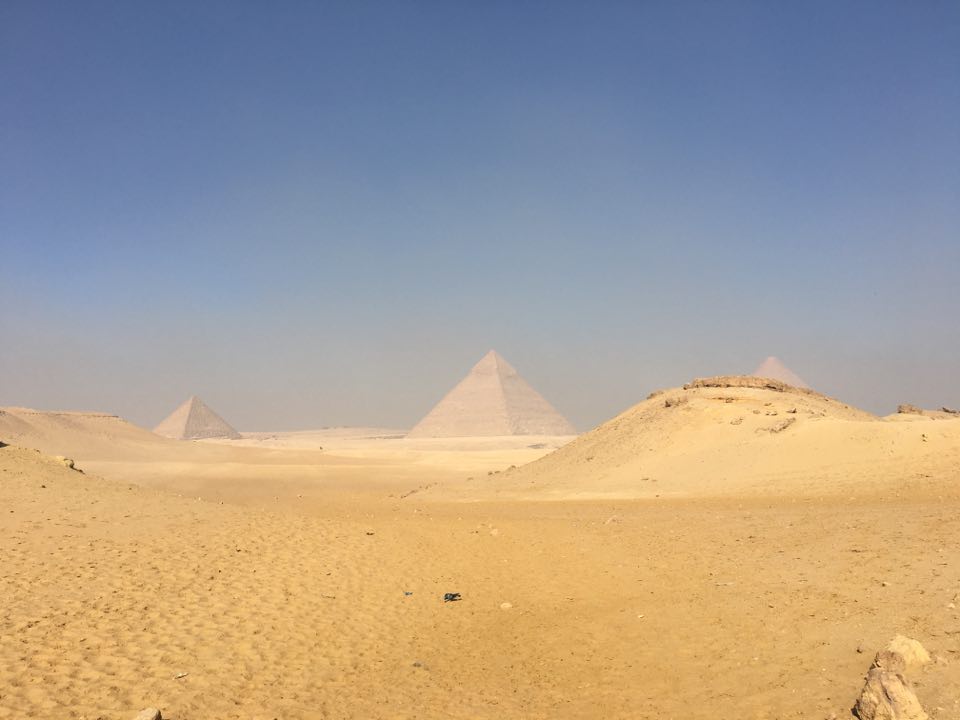 Before you get close to the pyramids, your tour guide stops you for a brief history lesson and for some photos. That’s one of the great things about our tour guide- he was very helpful. I never knew that there were more than 3 pyramids, or that Napoleon Bonaparte is accused of breaking the nose on the Sphinx. 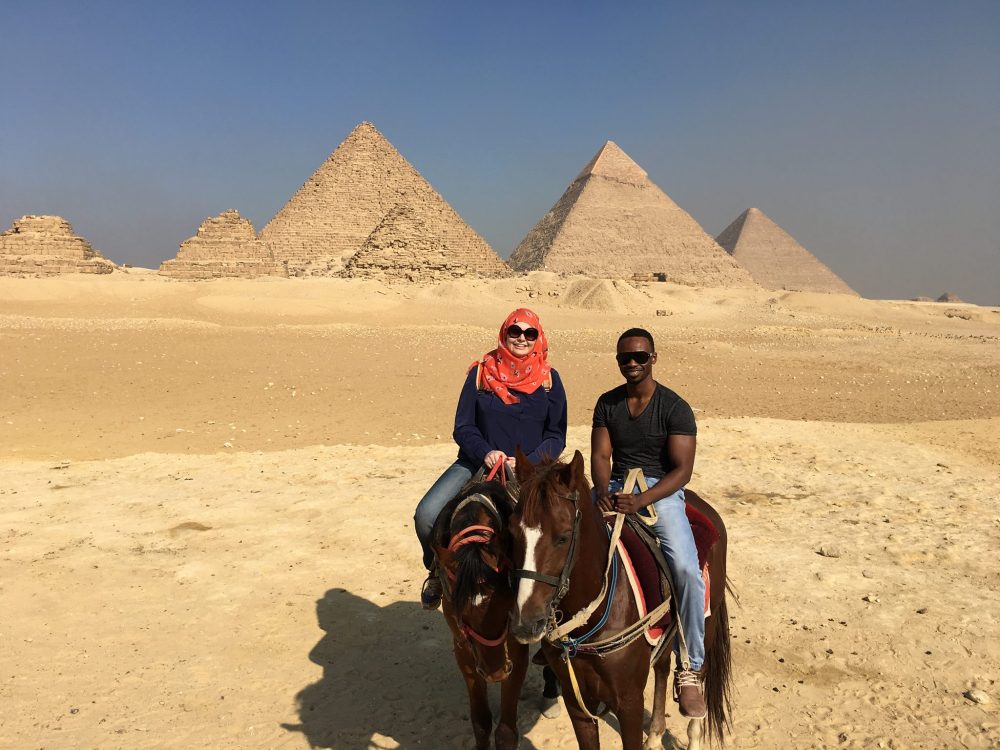 After our own private photo session outside the pyramids, it was finally time to get close. We went up to the larger pyramids first, and we got to walk around them and touch them. I don’t know what I expected them to feel like. I guess I imagined they’d be smooth due to years of erosion and sandstorms. They weren’t smooth- they felt rough and jagged. Our tour guide showed us a place we could step to climb partway up the pyramid. It was a lot easier going up than down. 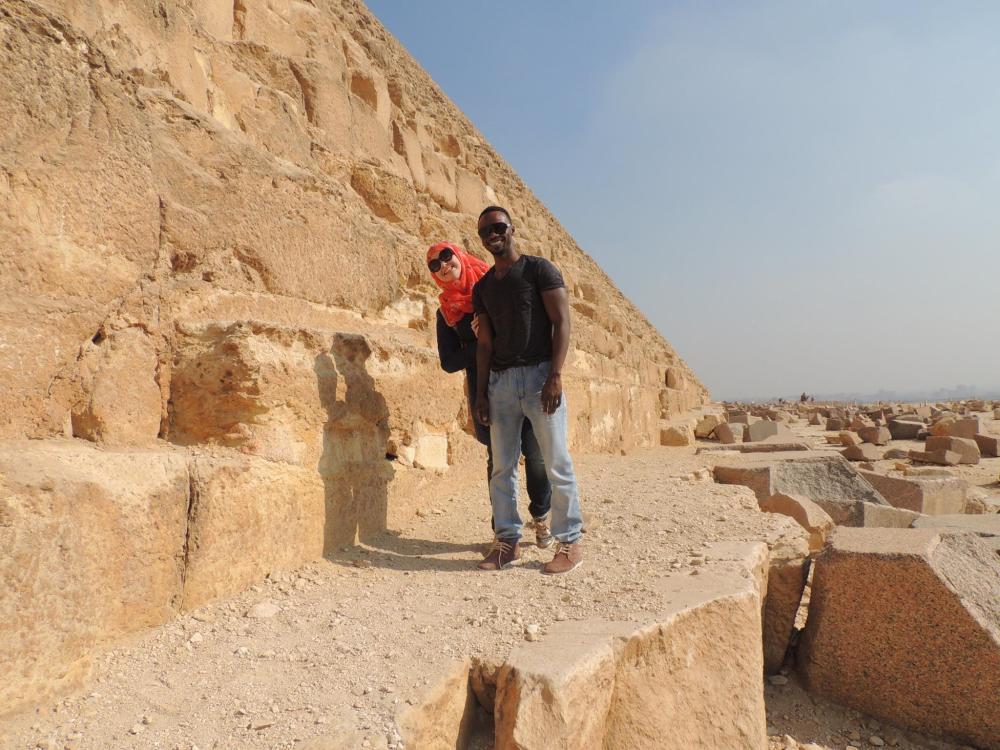 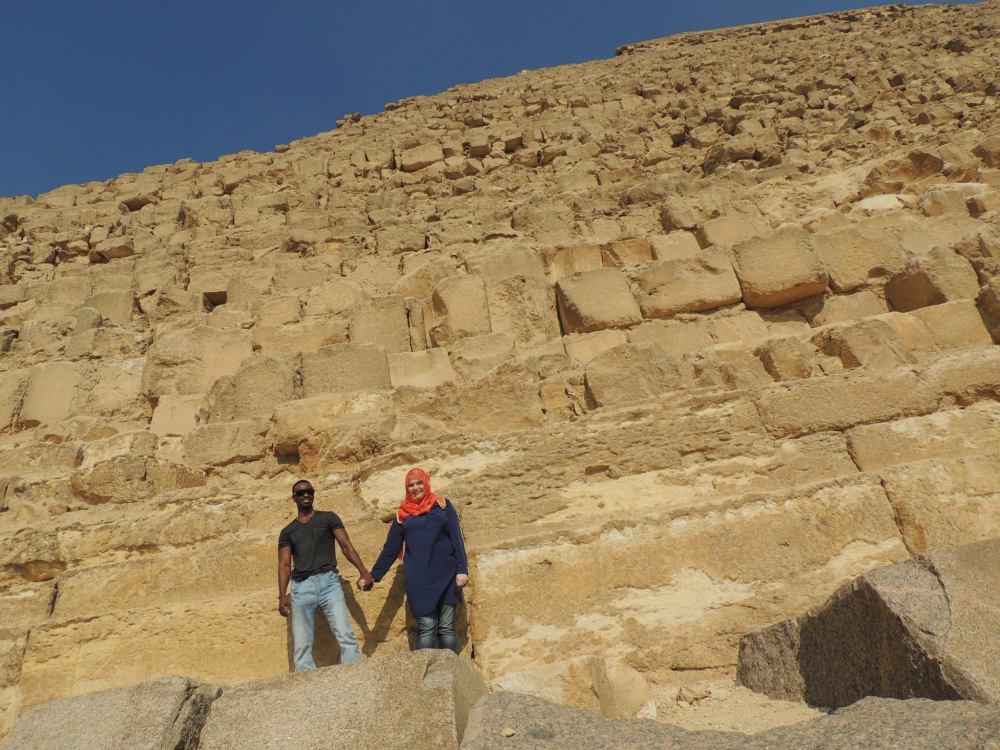 After we partially scaled they pyramid, we went to a different pyramid. Our tour guide told us not to speak one word from English for this section of the tour. I wasn’t sure why at first but quickly realized it is because if they think we are Arab, the guards would not bother us, but if they suspected we were American, they would try to get money from us.

I quickly ruined our cover upon seeing the entrance of the pyramid. It’s a very narrow with a deep descent unto an unknown area. My husband was already part way down, and told me to join him. “I don’t want to go,” I declared. “Come on, it’s not so bad… it isn’t that long.” “No no no no I don’t want to go really I can’t do it it’s so scary,” I freaked out.

He looked at me and said “Are you sure you don’t want to go? You don’t have to.” I nodded, and he started to climb out. But the minute he started climbing out I felt terrible. Just because I was going to miss out on this experience, I didn’t want him to miss out too. However, being the amazing husband he is, he wouldn’t go without me and leave me alone. So I sucked it up and entered the pyramid. And I am glad I am because what I discovered was quite incredible, and I got to experience this once in a lifetime experience with him. 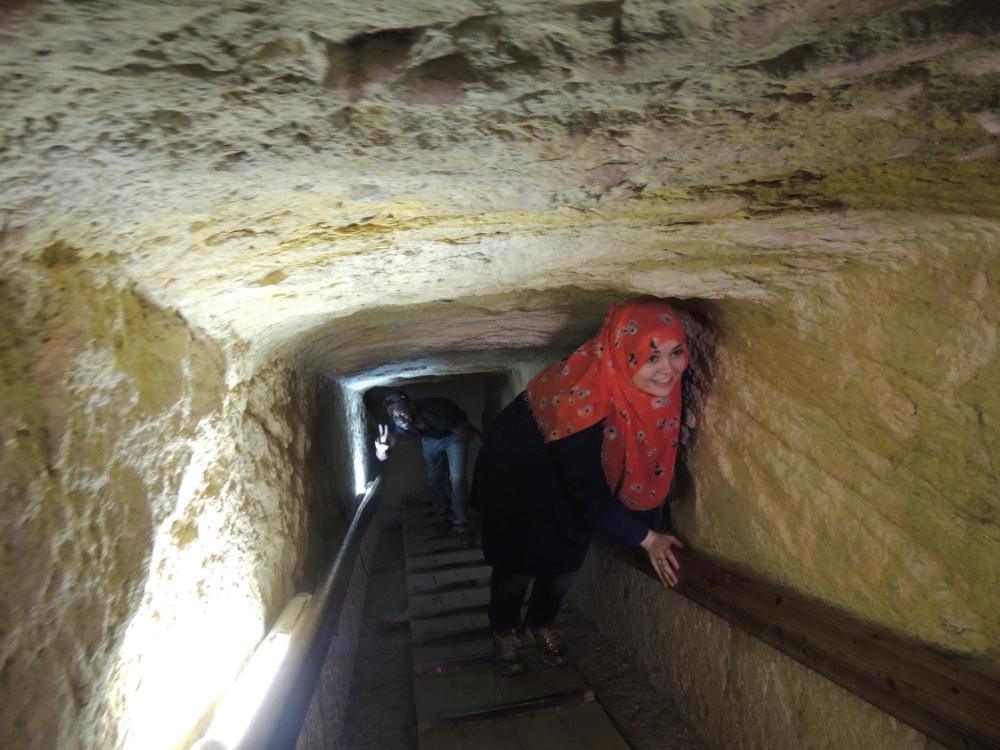 That whole entire massive pyramid, that gargantuan structure, this enormous creation, is all for one room. That’s right. One. Room. I was so shocked to find that there was only one room in the entire pyramid. Just one. I had always imagined there would be a series of intricate and complex mazes and traps through many rooms to navigate through, but no. There’s just one room. I guess in a way it took away some of the “magic” and “mystery” that they pyramids used to hold in my eyes. I now see that it’s just an ancient structure, nothing else. 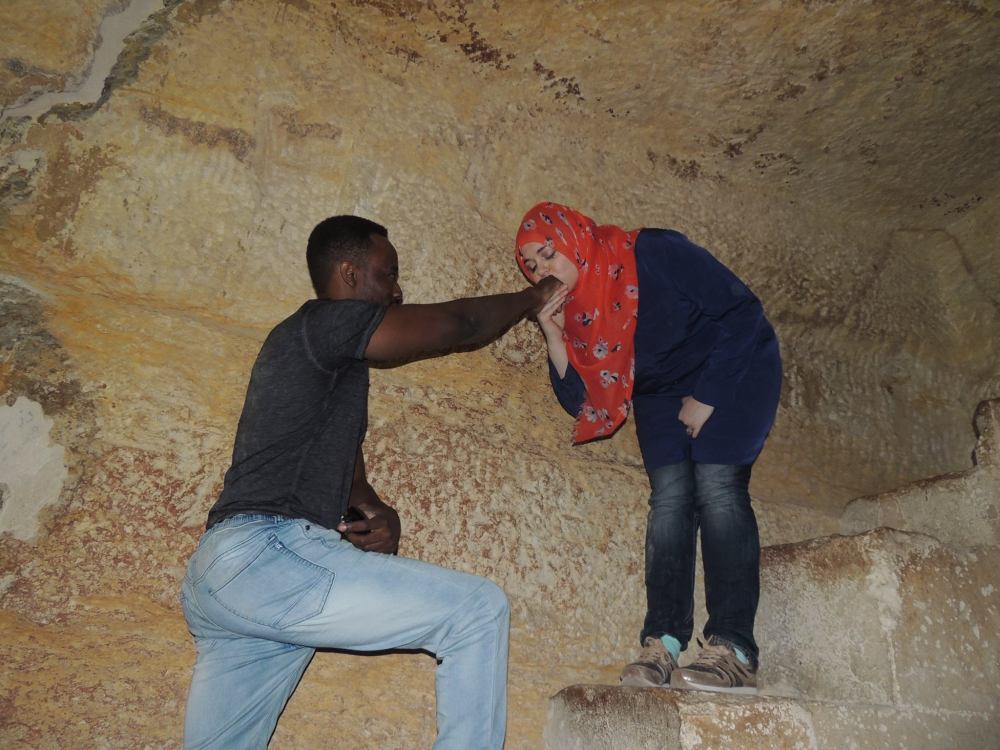 The room inside the pyramids had giant stairs that lead up to the ceiling, plus a hole in the floor where the sarcophagus housing the mummy had rested for hundreds of years.  The ceiling, walls, stairs, everything have been carved into stone. 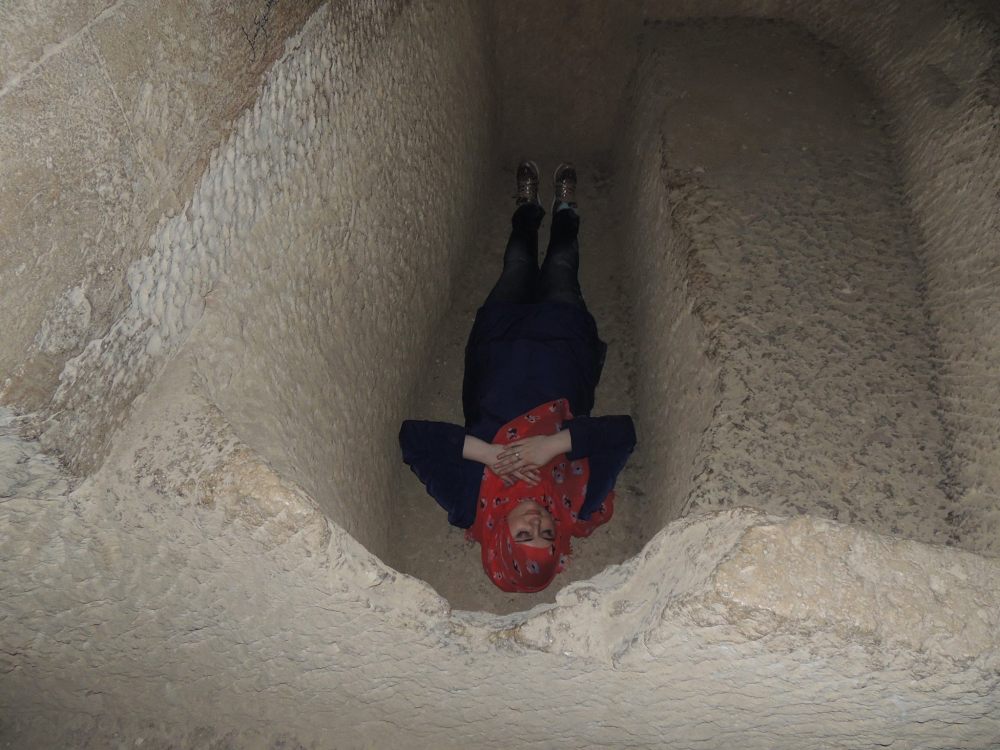 When we finally headed back up from the pyramids, it was time to get back on the horse. I wasn’t comfortable with my current mode of transportation, but it was only made worse by the fact that my horse decided it wanted to take a nap. While I was on it. Basically what I am saying is while I was sitting on my horse it literally fell over and tried to sleep… 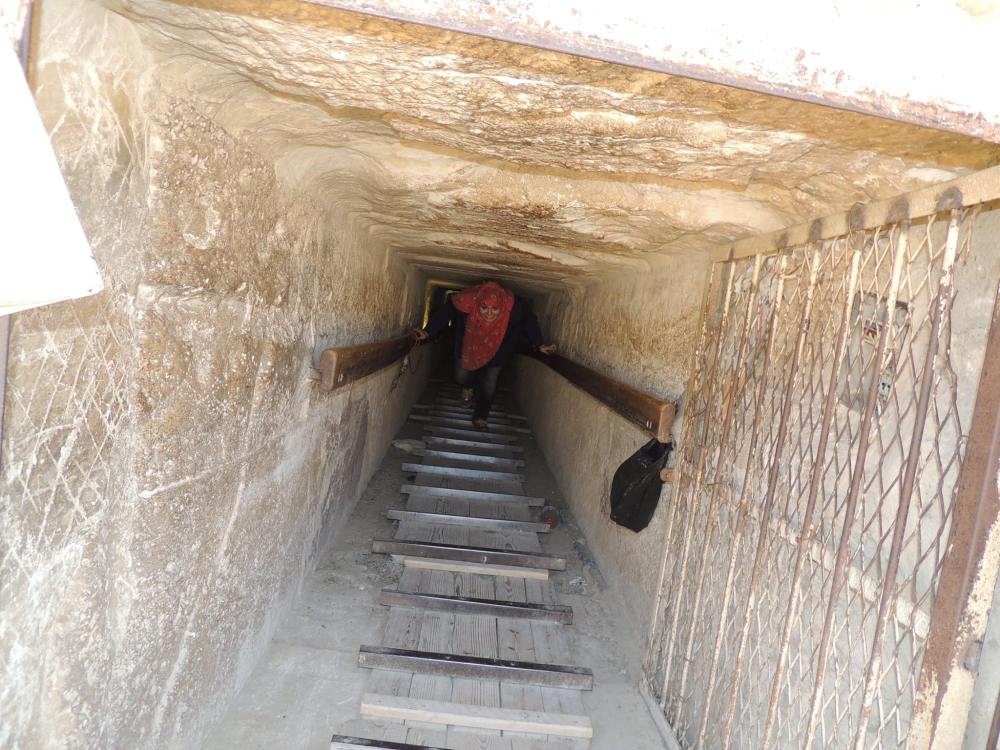 Obviously after my terrifying incident with the horse, I was nervous for the next part of the tour- camel riding. I had a bad experience with a camel in the past (I actually fell off it) so I was really nervous to ride it. I wanted to pet it and love on it, but not ride it. Well I thought I wanted to pet it until I smelled it. 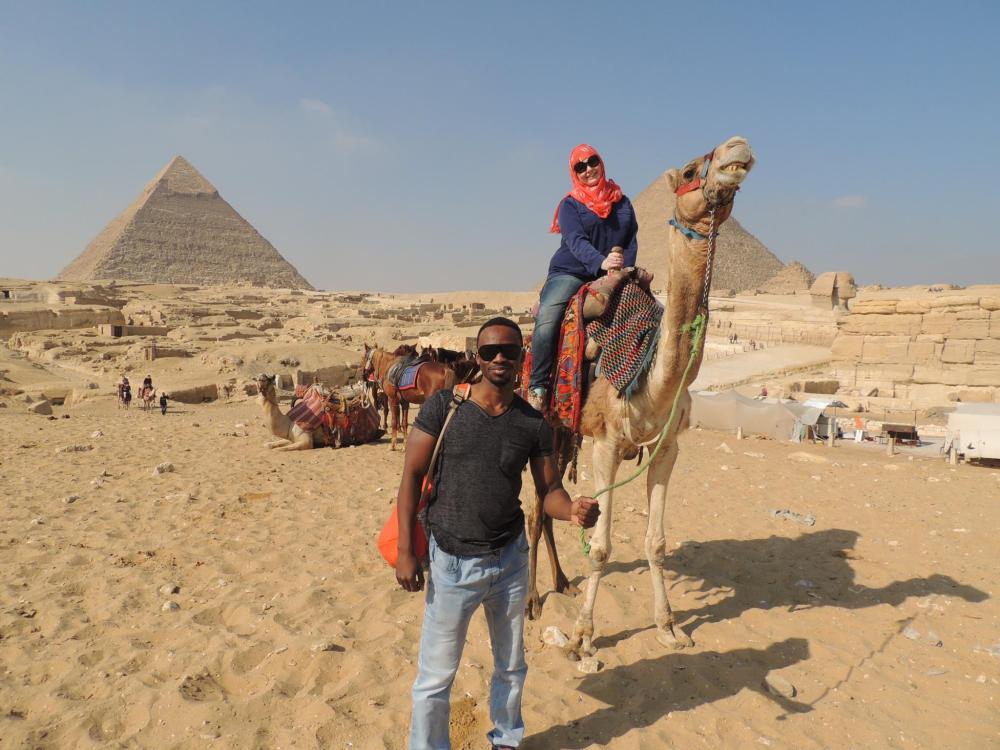 I really think the camels in Egypt are far more aggressive than the ones here in KSA.  Ours kept growling at us. Even with his grumpy attitude we decided we couldn’t pass up the opportunity to take selfies with this camel. Because he kept growling and fussing the entire time, it looks like he is smiling in the pictures. 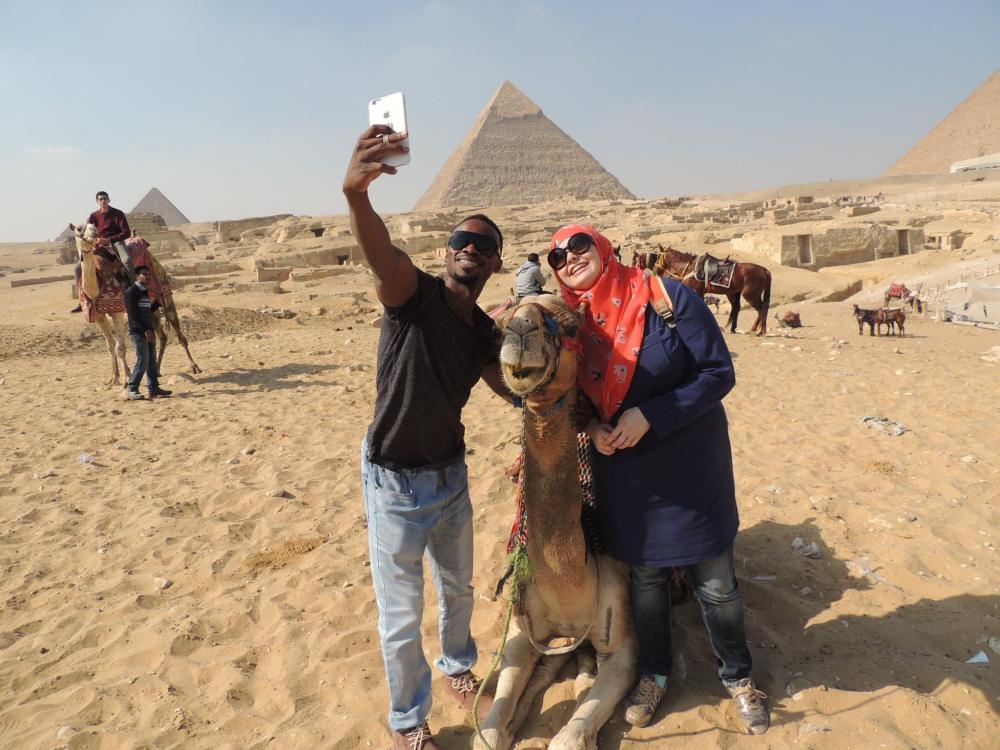 When we finished with the camel, we headed over to see the Sphinx. According to our tour guide, the Sphinx has the body of a lion, face of a man, and hair of a woman. 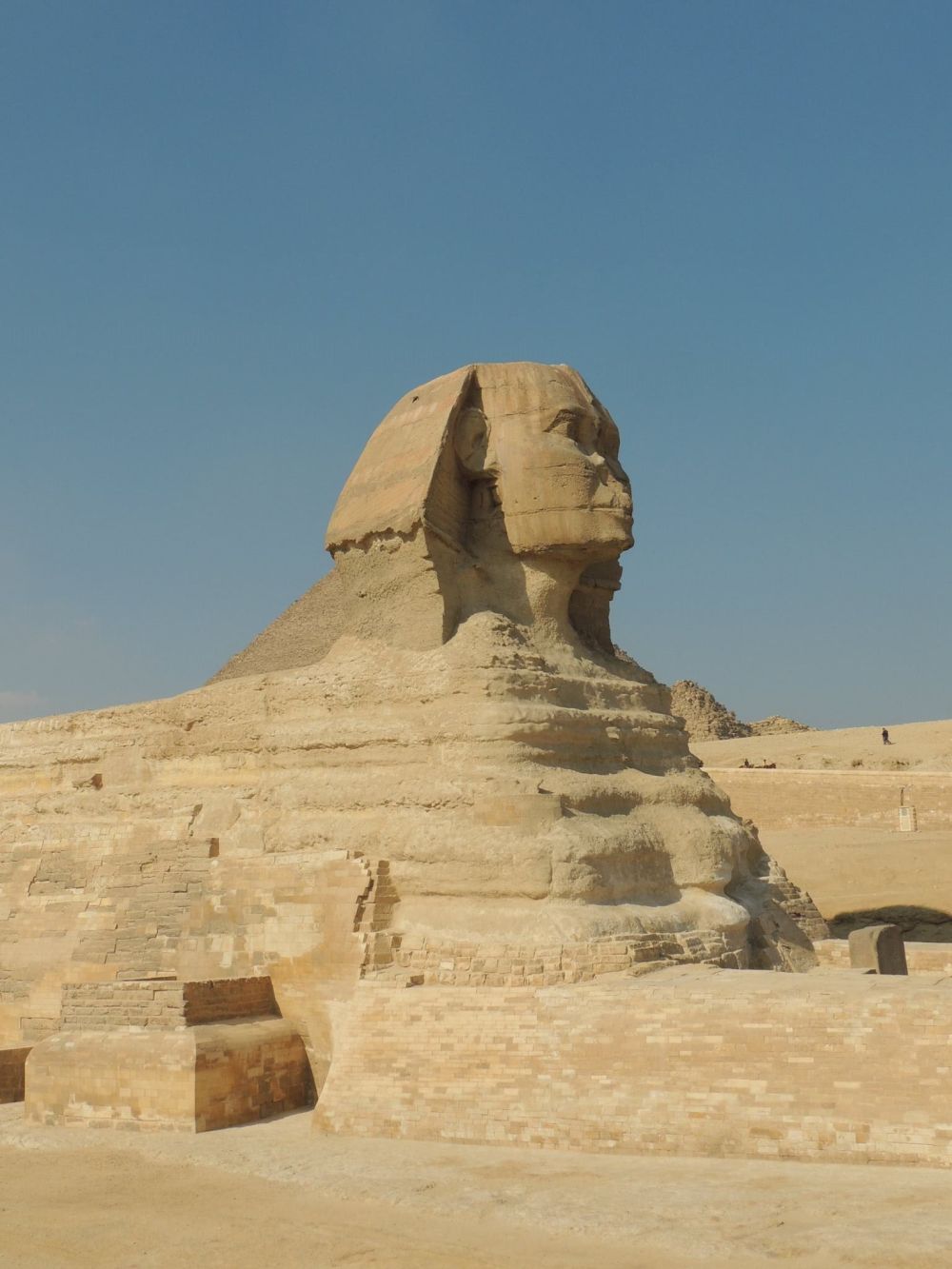 The Sphinx was actually a lot smaller than I imagined it would be. Another thing I didn’t realize is that it’s actually really close to the pyramids. It’s closed off and you cannot get near it, however you can walk to the structure across from it to get a better view. 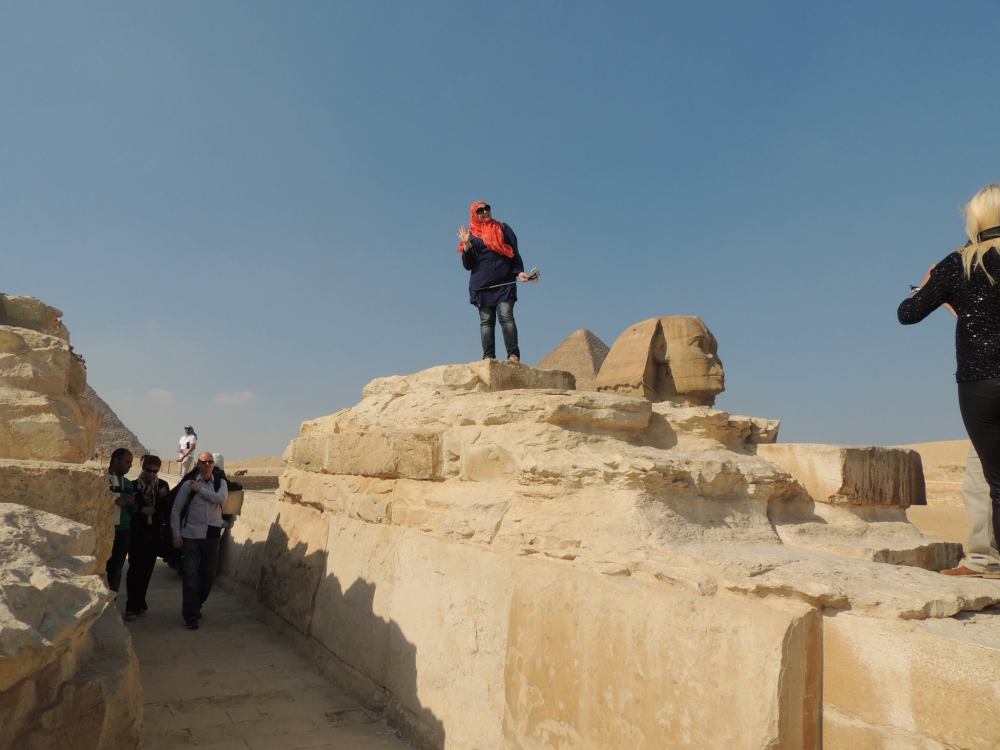 After we toured the Sphinx, we met back up with our tour guide. We got back on our horses, and began heading back towards the town. We had skipped breakfast, so by the time we finished our tour we were starving. We reunited with our taxi driver, and asked him to recommend a restaurant. He pulled up to this walled in area, and told us that we’d find a restaurant inside.

When we went inside the walls, I was pleasantly surprised to find that there was a gorgeous garden park. 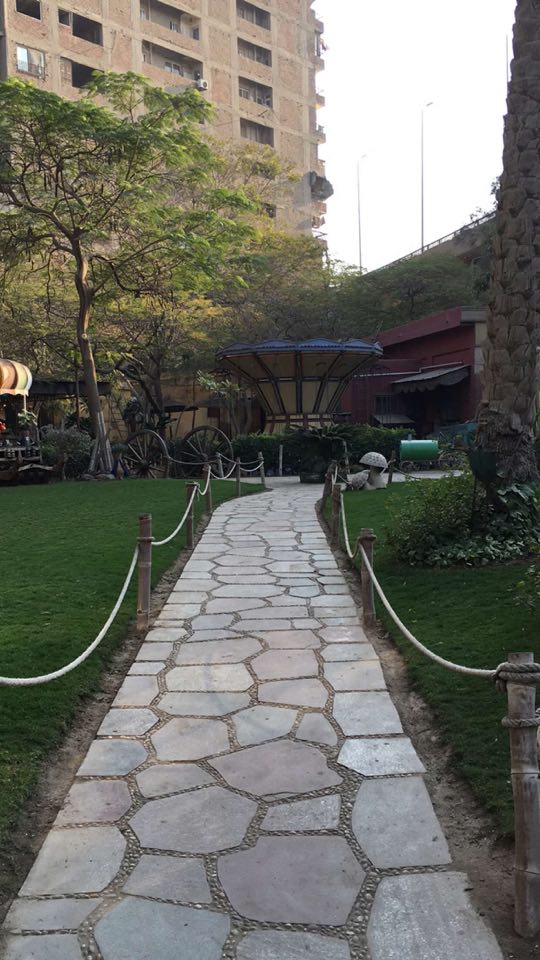 The atmosphere of the restaurant was perfect. Because the weather was so pleasant we decided to sit outside. We ordered a mixed grill platter, with hummus and Egyptian rice. The food was delicious. 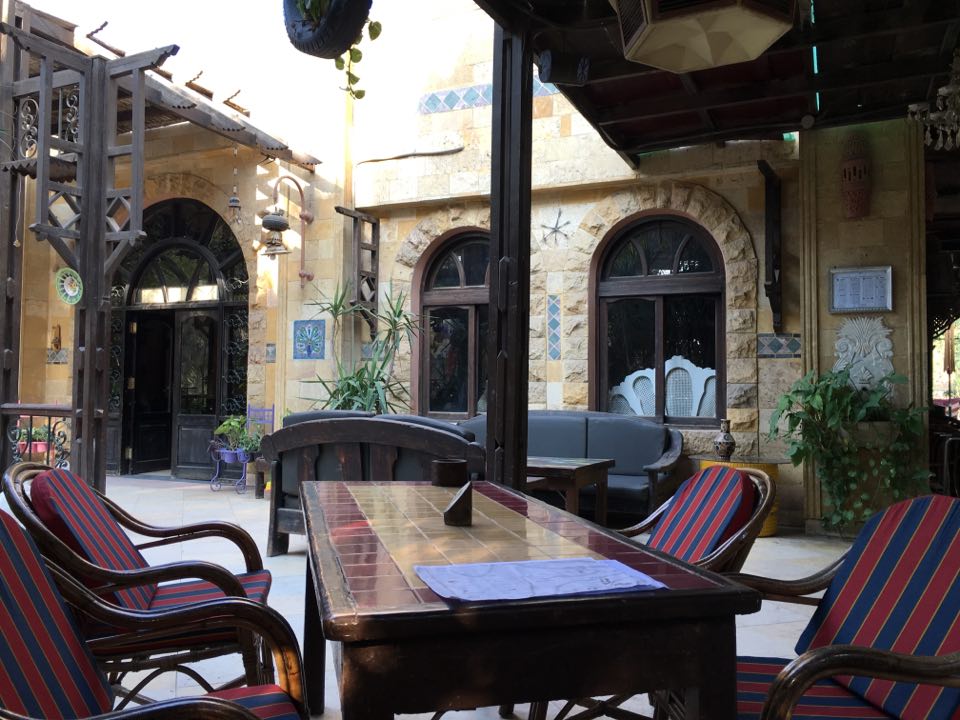 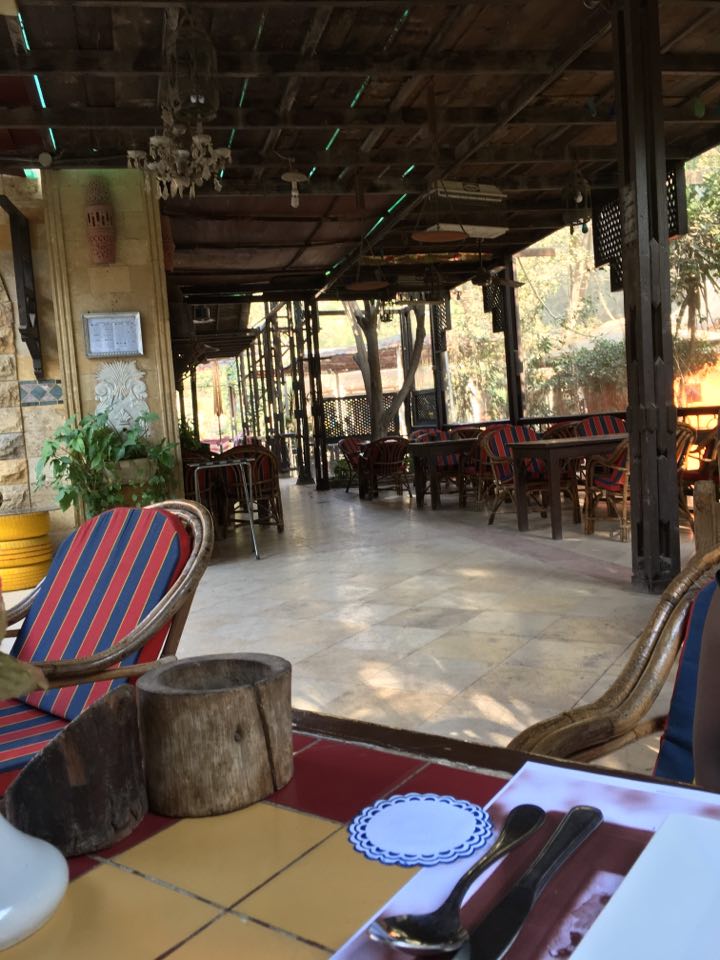 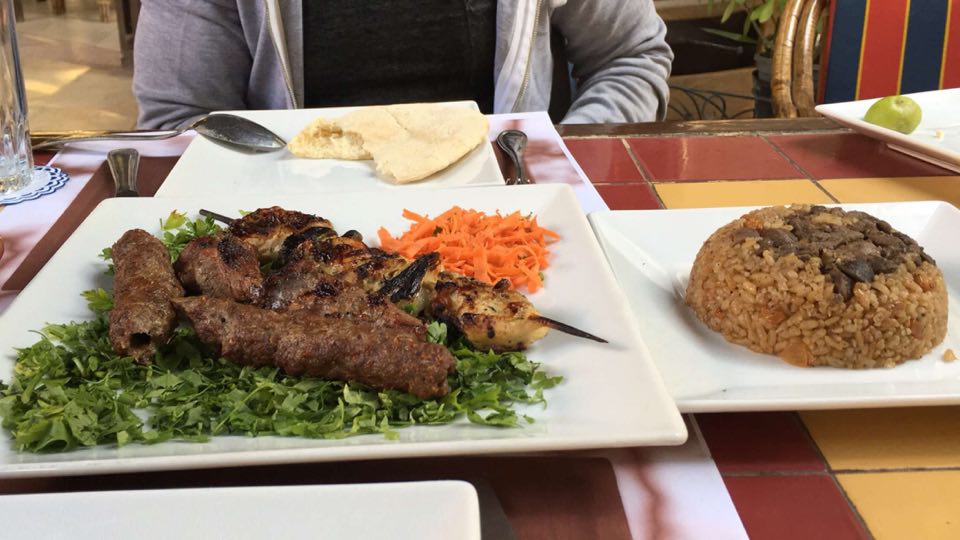 After we finished eating, it was starting to get a bit late.  Well, not really late, but most attractions close around 5 PM. We headed to a museum full of Ancient statues, mummies, and many other interesting artifacts. After having a quick rest and change of clothes in our hotel, we concluded the night with a trip down the Nile. Want to see pictures from the rest of the day? Check back for part two.