While I do enjoy the occasional cup of tea, I have to admit that I am not an avid tea drinker while I am in my own country. But that’s only in my country. When I come back to the Middle East, it seems I am drinking tea on a regular basis. If someone isn’t making it for me it seems I am making for someone else. Rest assured, there is always a cup of tea waiting for you somewhere. The only thing that could make the tea here any sweeter would be their adorable tea sets, available at almost every store selling home goods.

The problem with cute tea sets? They cost a lot of money! And I am not one to spend large amounts of money on anything, (thank you student loans!) let alone a tea set.

By this point you can probably imagine my delight when I found an entire set plus the stand with a 60+% discount. I was ecstatic! I carefully chose a set with deep plums, burgundys, and reds to compliment our home decor. The sales man went to the back and put everything away and brought a box to the checkout, where I happily paid for my new tea set. 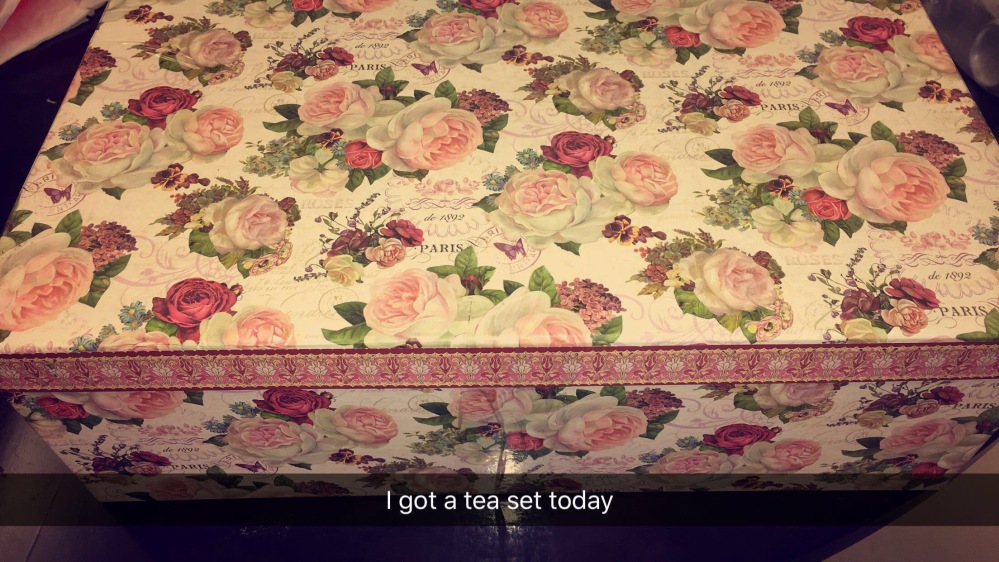 When I got home I prepared to put the set away, only to discover that they didn’t pack the set I wanted. I confirmed with the salesman multiple times, because he tried to get me to buy a different set since it was easier to pack. Yes, it was similar, but I was still not happy. It isn’t the set I chose! I thought about just keeping it but when I discovered that multiple pieces in the set were broken or damaged I knew there was no keeping it. It had to go back. (Major shout out to my husband for taking me there immediately after a long shift and one hour before he went on call.)

Luckily for me the salesman working when I bought the set was there when I returned. I told him he packed the wrong one. He told me he knew he packed the wrong one. HE PACKED THE WRONG ONE ON PURPOSE. I asked why he would do such a thing, and he proceeded to tell me the set I wanted was missing a cup . He refused to sell it to me, despite my pleas. I told him I could buy a replacement cup that was almost identical, and would go unnoticed. Finally after he agreed to sell it, he informed me that other pieces were also missing, and no additional discounts would be made for the missing pieces. After I thought about it, I decided that I couldn’t buy a broken tea set, nor could I pay for such terrible service.

So, alas, I returned home empty handed. I guess I won’t buy a tea set until I can catch one on sale again. And I don’t think my next set will be coming from Centrepoint, since customer service really isn’t their cup of tea…