Whenever I see someone I haven’t seen in a while, I’m always greeted with a “I noticed you’ve stopped blogging.”

And, in my awkward state, I always groan “yeahhhhh” awkwardly in reply. Not totally because they are right and I have stopped blogging, but mostly because I am surprised anyone at all reads my blog. But I digress. This time I actually have a good reason for my absence.

At the height of the “how is prangent formed” viral video, I went to Lulu’s hypermarket with my husband. Being the control freak that I am, I usually like to do my grocery shopping alone; however, I had been feeling incredibly exhausted so thought it best to take my Mamdouh along to help. We had been married for over a year, but between us living in separate cities and, at one point, separate countries, hadn’t quite gotten in the habit of grocery shopping together. Seriously. It’s kind of a pain to go to the grocery store with someone else if you aren’t used to it. Nowadays it’s a breeze, but in those days it was not an easy endeavor.

After 2 long, grueling hours of deciding if we need extra laundry detergent, choosing the *perfect* piece of fruit, and figuring if we want chicken or beef for dinner tomorrow, I just couldn’t do it anymore. I was dizzy and nauseated, and I told my husband I wanted to go sit in the car while he finished the checkout process.

After what felt like an eternity (but realistically was probably only 10 minutes), my husband joined me in the car. I told him I didn’t know why I was feeling so crap recently, and he starts joking “oh no, you’re pegnate. You are pergrent,” referencing that viral video I mentioned earlier.  We are laughing when we both become dead silent, simultaneously remembering that there is a little truth in all humor.  “Oh my God,” I muttered as I started thinking about all my symptoms over the past week, “I think I am gregnant.”

We immediately went to the pharmacy, and as soon as I got home I took the test. I know you’re supposed to wait 3 minutes before you look at the result,  but after waiting about 10 seconds, that second pink line appeared. The epiphany I had in the Lulu’s parking garage was true- Pergert, prangent, pergenant, whatever you call it, we were going to have a baby. (Fun fact- I ended up going into labor at the same Lulu’s…)

Let me tell you something about incubating a child within the confines of your womb. IT’S EXHAUSTING. In the beginning, you feel like you can’t decide if you want to vomit or if you want to sleep.  Once you finally get past all the nausea, you feel like you want to eat all of everything all the time. Your back and hips and all the body parts you didn’t even know you had hurt. And if your kid is a kicker? Prepare to suffer. You’ll forget what your feet look like, and you will miss sleeping on your stomach…. but I will say, it’s totally worth it.

So after 41.5 weeks of being pregnant, mostly during the summer, in one of the hottest parts of the world, I gave birth to a super chill daughter alhamdulillah. We named her Dahlia. It is a name that works in both Arabic and English (it’s a beautiful flower in English.) She was born on August 6, 2017 at 8:18 AM. I decided to give birth in Saudi Arabia, and boy, do I regret it. I was expecting a smooth birthing experience as I had an amazing, easy pregnancy. I also went to a private hospital because I thought I would be recieving the best care in the country. Instead I ended up with an emergency c-section that left me with broken ribs as well as a few other complications. But that’s a story for another day, all that matters is my kiddo is healthy. Alhamdulillah.

I don’t prefer to share her pictures publicly on the internet, because there are a bunch of crazy randos out there, but I do share pics occassionally with her face edited out. The following photo is a photo from her aqeeqah, a party given for new babies in which a sleep is slaughtered and shared with friends and chartities.  Now that she is getting a bit bigger, and now that I have recovered from a traumatic birthing experience, I look forward to blogging more frequently, inshallah. 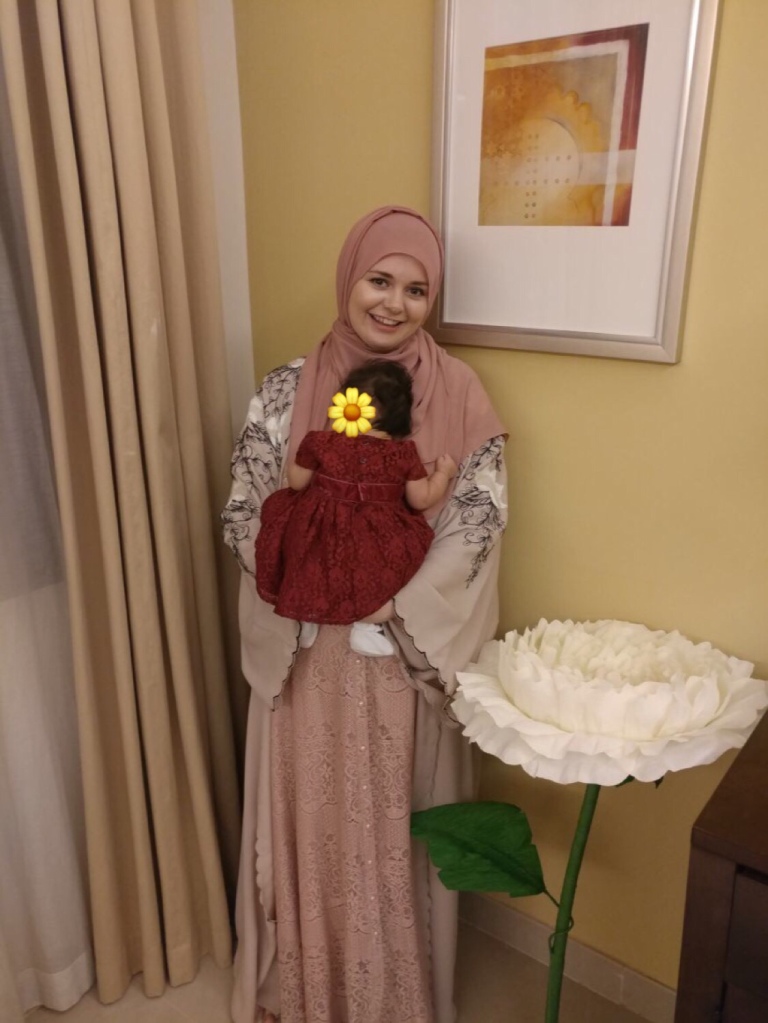